Magda Verfaillie of Mycelia, Belgium, visited John Donoghue in the margin of the Third IMMC in Washington. A visit to John Donoghue is more than just a scientific experience. Few other people better understand the art of combining humour and seriousness to elevate science to a higher level than he does. This American researcher earned his spurs with his efforts to make shii-take growing profitable. In fact, he can almost be seen as the godfather of shii-take growing in the North West of the USA. John studied botany and was specialised in phytopathology. He started his career in 1976 as an independent shii-take grower with his own company “Arboretum Mushroom Farms”. Several years later a second activity was added – trading and processing wild mushrooms for  ‘Table Mountain Mushrooms Inc’. In 1986 together with Prof. Bill Dennisson and Paul Przybylowicz, John founded Northwest Mycological Consultants (NMC), with the aim of conducting research into lignivorous mushrooms and providing technology to growers. NMC also produces a limited amount of spawn that is sold including cultivation advice. This means the company can distinguish itself from the larger spawn producers. Between 1991 and 1996 John headed tens of projects in his capacity as a research scientist, including one in Bhutan. This allowed him to amass wide expertise, primarily about gas exchange in substrates for lignivorous mushrooms. As far as shii-take growing is concerned, John advocates the ‘Oregon style’ that slightly differs to the ‘Pennsylvanian style’. Both methods are based on sterilising, inoculating and incubating loose substrates in bags, which breathe. For the following phase when the fruits ripen, the blocks are unpacked in the Pennsylvania method, but left in the bags with the Oregon method. Both methods have advantages and disadvantages, but John knows second to none the importance of correct gas exchange in the method he promotes. The step towards designing packaging was an obvious next challenge. After a rather bad experience with one bag producer, John launched the ‘Oregon Bio-Bag’ under the same firm name together with ex-grower David Dykast in 1992. Many more developments can also be attributed to John. In 1994, under auspices of NMC, he designed the ‘modular growing room’ for lignivorous mushrooms, an affordable system with excellent profit margins. A few years ago a semi-automatic inoculation system was added to inoculate substrates for exotics under aseptic conditions. Both products have a good price-quality ratio, and are currently successfully used by a number of growers. John is a well-known figure in the world of lignivorous mushroom growing. He is a welcome contributor at international congresses, thanks to his enthusiastic and humorous speeches, preferably dealing with his favourite subject of “gas exchange in substrates for exotics”. In 1988 he published, together with P.B. Przybylowicz the “Shiitake Growers’ Handbook“, a work still considered to be the bible for shii-take growers. He has also written many interesting reports and publications about optimising cultivation of lignivorous mushrooms. John emphasises three major pillars in mushroom production: spawn, climate management and bags. By providing assistance on three fronts simultaneously, he was and still is able to add value in the form of quality to the Oregon shii-take. In addition, John is an open-minded character and a big promoter of grower co-operation. In Oregon, John has stimulated growers to work on quality and product standardisation, and to better harmonise market demands and the supply. If the massive imports from China form a threat for growers of exotics in general, the strategy followed by local growers means they can still enjoy a comfortable existence. For a full report on the Third IMMC, see Mushroom Business 14. 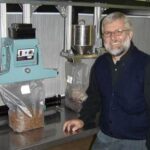 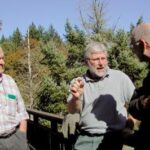